Welcome back to The Midnight Hour!

Let’s walk a little closer to the dark side this time. We won’t get engulfed in it just yet, but don’t worry we are getting closer and closer to the shadow realm. Since there was a post a few weeks ago about tentacles let’s start with tentacles! There’s nothing to fear because it’s just tentacles. Think of them as if they were dicks. Lots and lots of dicks that are very long and slimy.

So Ingrid believes that there is a traitor in the organization she works for. She discusses this with her superior and then comes in this really shady dude. Right off the bat you just know this guy is the traitor because he’s got that look. We find out that they have captured one of the Taimanin ninjas and they want to interrogate her. Ingrid decides to tag along because hey, she’s got a hunch that this dude is the traitor!

They end up going to this castle where she confronts this shady guy. Then, she transforms like fucking Sailor Moon! Well with darker skin and a lot more cleavage. Well they attack Ingrid and she starts rise to the occasion to kill these demons. It’s flashy, and cool, and filled with magic. It is a point that will make you stop to realize you’re probably still holding your dick or rubbing your clit and wondering where is the sex?

Luckily the fighting doesn’t last much longer. Ingrid stands her ground for a good while like a strong feminist up holding rights for women. That is until things go south really quick. The moment she gets caught she’s injected with drugs that makes her… well I guess, WILLING is the word.

It’s so intense that you might get to this point and already came, but its not over yet! The fun is just beginning. Right away there are tentacles that tie her up, choke her out, and fill her up. She’s surrounded by monstrous dongs, but remember these are tentacles and not just a lot of dicks. This one is about dominance. When a strong female character like Ingrid gets dominated I think it’s one of the sexiest things in the world. Especially as she gives in little by little to the ecstasy she is feeling. With that I will leave the rest for you to watch on your own. Trust me, you’ll thank me later. 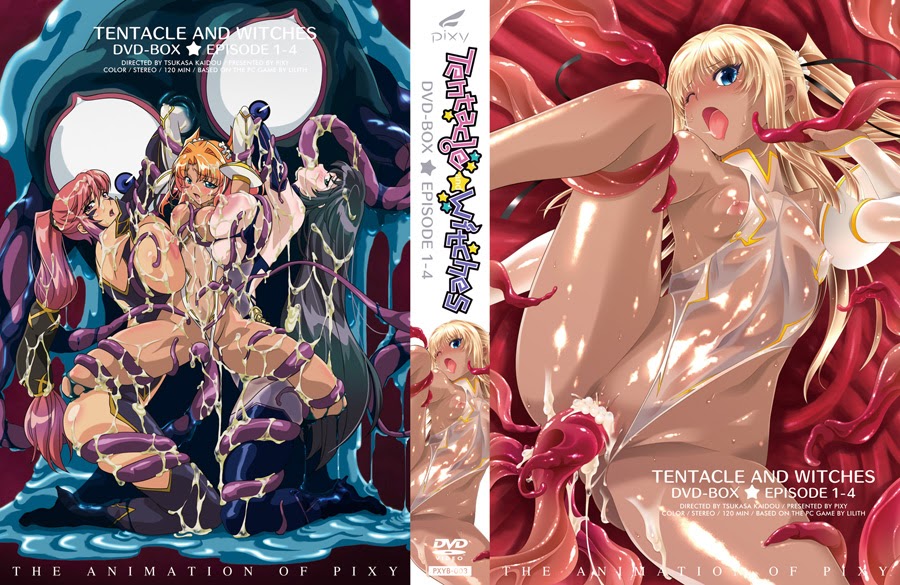 Now don’t let the picture above fool you. This title is not as crazy as it looks. Ok, it’s a little crazy, but it has a much lighters storyline. Yes, I know I said lighter but that’s because Ingrid gets pretty dark. This one is about monsters raping a girl. Actually more like a monster loving three girls. Maybe we’ve treaded into the darkness a little too far so let’s walk back a little to the light. Come with me and let me control your sexual desires.

We start off the story with a boy. (I know that’s not anything crazy… yet) The boy is in love with his teacher. (I know also very cliche) This boy doesn’t know that his teacher is really a witch! Well, one day he follows her and discovers this secret. He sees her doing magic and gets a little more curious. I mean who doesn’t especially when a teacher like this is packing a huge rack and a skin tight outfit? You’d think maybe she’d be in a rob and a hat but not these witches.

She is conjuring a spell that the boy gets caught in and now is forever cursed. I kid you not because I couldn’t make this kind of shit up. The curse actually turns the boy into this slime monster with tentacles. The only way for him to revert back is to be sexually satisfied. (Oh hentai… I love you so much!) The witch with her two disciples take it upon themselves to sexually satisfy the boy so he wouldn’t go out and rape every woman he sees. Of course the witches feel obligated to do this, it is in fact their fault.

There’s other things to the plot in this story too. There’s a warlock who wants this power that can only be birthed from the teacher and it gets kind of crazy. In the end though, everything resolves itself and you may be wondering who the boy ends up with? But that will be up to you to watch and see for yourself.

And with that those are the two titles I have for you tonight my minions.